793
Scan with our application for additional information. 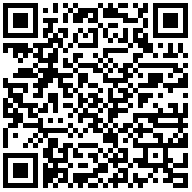 village of Pchelari in Haskovo, Bulgaria 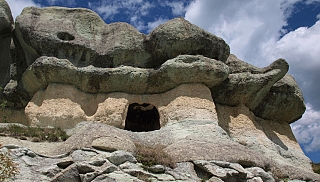 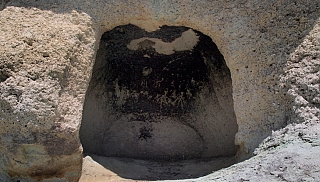 The surroundings of the village of Pchelari are dotted with monuments of culture from Antiquity and the Middle Ages. Such are the tombs hewn in eroded rocks in the areas of Hambar Kaya, Ak Kaya, Kara In, Mal Kazan, Hodzhas. In the Hambar kaya area there are traces of 6 tombs vertically dug into the upper part of the rock massif and covered with large stone slabs.

On the Akkaya rock, about 10 metres below its highest point, one can see the trapezoidal opening of the Kara In rock tomb. Its aperture (entrance) is trapezoidal and is located to the southwest at 700-800 m north of the Arda River, just opposite the mouth of Krumovitsa River. The tomb constitutes a chamber with an almost trapezoidal form, 2.40 m long and with a width of the sides of 1.80 and 2.30 m. Its height is 1.80 m, reaching as high as 1.95 m at the entrance. A shallow dome has been carved in the middle of the ceiling. The tomb floor is flat and the corners are rounded.
At аbout 70 metres west of the tomb, at the foot of Akkaya rock, there is another rock-hewn tomb with an arched entrance. It consists of a chamber with a width and depth of 2.10 m and a height of 1.50 m. The floor is flat and curved like an apse at the rear end and the ceiling is vaulted. The entrance is arched, facing south. The walls and ceiling of the tomb are covered with graffiti - numerous later drawings: circles (symbolizing the Sun), rays, circles of dots, crosses, lozenges, quadrangles, and other symbols and signs. The Christian symbol of the cross is carved in the rocks more than ten times.