46
Scan with our application for additional information. 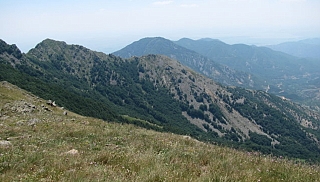 Part of Stambolovo Municipality falls into the Eastern Rhodopes Protected Area, proposed to be declared part of the European ecological network NATURA 2000.This is an area that is to be declared a protected zone under the EU Directive on the Conservation of Natural Habitats and of Wild Fauna and Flora, or, as is briefly known, the Habitats Directive. This protected area encompasses most of the Eastern Rhodopes. It spreads over 2,173,530 decares. The two highest ridges in the Eastern Rhodope Mountain fall within its boundaries - Gumyurdzhinski Snezhnik with a height of 1,463 m above sea level and Maglenik ridge with a height of 1,266 m.
Within the protected area there are pristine forests of the Balkan endemic species European ash (Fraxinus excelsior) still untouched by human hand. The zone is also important for the conservation of several types of riparian forests composed of the alder, the Oriental plane, the white poplar and willow trees.
Other important habitats are those of mixed-oak forests. They are composed of the Austrian oak (Quercus cerris), the Hungarian oak (Quercus frainetto), and the pubescent oak (Quercus pubescens). Here they occupy a considerable area.
In the past, both species were widespread. Today, however, they are threatened with extinction worldwide and are included on the Red List of the International Union for Conservation of Nature (IUCN).
Both species are of priority for conservation according to a number of international conservation documents:
The Berne Convention on the Conservation of European Wildlife and Natural Habitats
The Convention on International Trade in Endangered Species of Wild Fauna and Flora
The European Union Directive on the Conservation of Natural Habitats and Wild Fauna and Flora. In Bulgarian legislation, tortoises fall under the protection of the Biodiversity Act, according to which offenders are punished with a fine of up to BGN 10,000 and compensation for each killed specimen, and under also the Penal Code of the Republic of Bulgaria, according to which poachers are punished with a fine of up to BGN 5,000, imprisonment of up to 5 years and payment of compensation for each destroyed specimen.
Regarding the reptiles encountered here, interesting are also the habitats of the western Caspian turtle (Mauremys rivulata). The place is of utmost importance for its conservation. In the water basins in the area one can observe also the other freshwater turtle species - the European pond turtle (Emys orbicularis). Of the 30 species of bats occurring in Bulgaria, 19 have been registered in the Eastern Rhodopes protected area. The caves along the valley of Arda River and near the village of Ribino provide shelter to tens of thousands of these flying mammals. Among them are the species included on the World Red List, namely Mehely's horseshoe bat (Rhinolophus mehelyi), Blasius's horseshoe bat (Rhinolophus blasii), the greater horseshoe bat (Rhinolophus ferrumequinum), the lesser horseshoe bat (Rhinolophus hipposideros), the long-fingered bat (Myotis capaccinii), the greater mouse-eared bat (Myotis myotis) and Geoffroy's bat (Myotis emarginatus).
Forests along the Greek border are visited by wandering brown bears. In the water basins on the territory of the protected area one can observe also the common otter - a species globally threatened with extinction."

INTERESTING FACTS:
The Eastern Rhodopes protected area is one of the four zones in Bulgaria, on the territory of which grows the endemic Bulgarian fir tree, also known as Tsar Boris's fir (Abies borisii-regis).
It is also the most important zone for the conservation of the populations of the two tortoise species occurring in Bulgaria. These are the spur-thighed tortoise (Testudo graeca) and Hermann's tortoise (Testudo hermanni).
Rate: