1859
Scan with our application for additional information. 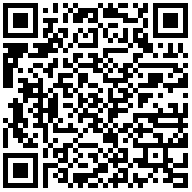 The Tumulus in Mikri Doxipara – Zoni 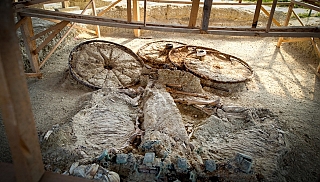 A significant archaeological discovery has been made in the northern part of Evros Prefecture. Five chariots have been found, buried together with their horses in the tumulus of Doxipara-Zoni. “These finds are important and unique for Greece as the unearthing of whole chariots or parts of them is an extremely rare chance for the whole area of Greece,” says the leader of the archaeological excavations the archaeologist Diamandis Triyandafilos.
Four funeral-piles for incinerating dead humans and five chariots have been unearthed. These are four-wheeled chariots together with the animals harnessed to them, found next to the incineration pits where the cremation of the deceased was done. The practice of burying chariots and horses next to their deceased owners was common not only in Thrace, but in many other regions of the ancient world in Europe and Asia. It symbolized the prestige and wealth of the owner.
The tumulus, dated from the end of the first and the beginning of the second century A.D. must have belonged to a rich family of landowners or merchants in the Roman Empire. It is important to mention that it was the period of prosperity of the Roman state and that similar burial mounds were found in Bulgaria and Turkey.
Various funeral gifts accompanying the deceased in the world beyond have also been preserved in good condition. Among them are clay and bronze vessels, copper and glass lamps, glass tubes of scents, gold and silver jewels. It is also interesting to see the skeletons of the horses found by the chariots. At that time Thrace continued to supply the Roman army with horses.
The great importance of the monument made the Ministry of Culture of Greece build a museum construction in the area of the tumulus. A lot of visitors from Thrace and other parts of Greece have been to the historical site and admired its uniqueness.
The process of restoration and conservation of the chariots and the funeral gifts continues. To preserve the look of the finds from the moment of their excavation impressing all visitors, it has been decided to start a three-dimensional reconstruction of the burned people, the chariots and the horses and to make their exact copies in natural size. By means of scanning and using a special computer programme, a three-dimension printer and special powder, tars and glues exact copies of the missing parts of the three chariots have been made; these have been joined and hand-coloured to acquire the colour of earth, bronze and iron.
These models will be displayed in the corresponding places, while the original items, after being restored and fitted together will be displayed in special cases next to them. Reconstructions of the chariots will also be made in accordance with the archaeological data. The exhibition will be complemented with rich illustrative material,that will take visitors back to the historical period when the tumulus was raised. It will acquaint them with the every-day life of the ancient inhabitants of the region, especially with their beliefs, customs and rites connected to death. The excavations here were started in 2002 by the 19th Service for Pre-Historical and Classical Antiquity Archaeology of Thrace. The Tumulus is 30 km west of the town of Orestiada.
Though the development of the archaeological site has not been completed yetH tourist visits have not been prohibited.
Rate: