6694
Scan with our application for additional information. 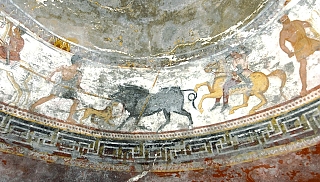 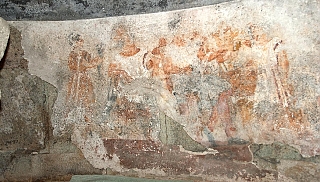 Many traces of prehistoric, Thracian, Thracian-Roman, late antique and medieval settlements have been preserved in the vicinity and within the borders of the town of Haskovo. In December 2000, in the Roshavata Chuka mound near the village of Alexandrovo, a team of archaeologists led by
Dr. Georgi Kitov (1943-2008) made one of the most significant discoveries in Bulgarian archaeology.
By penetrating through an opening made by treasure hunters, the scientists came across a Thracian tomb from the 4th century BC with incredibly well-preserved frescoes. The very first inspection in situ showed that the artistic decoration is unique, unparalleled among previously discovered structures of this type. Impressive is also the architecture of the tomb, which in its size rivals the most monumental tombs unearthed in Bulgarian lands. The burial mound is located in the immediate vicinity of the village and stands out against the background as a beautiful hill. The height of the mound is around 15 m and its diameter exceeds 70 m. At its eastern periphery starts a corridor with a length of more than 14 metres, passing successively through a rectangular and a circular room.
The building used to perform the function of a heroon (shrine over a tomb). The small height of the hallway and the two entrances required that visitors would have to bend over in order to cross and all of a sudden find themselves inside a world of colours and shapes, floral and geometric patterns, images of foot soldiers and horsemen, domestic and wild animals. All images are depicted with unexpected realism and have an outstanding scientific and artistic value, coupled with a very powerful effect on viewers.
The paintings cover the entire round and rectangular chambers and a small part of the corridor. Hunting and battle scenes as well as scenes of a burial feast alternate with monochrome tiers and such with ornamental decorations. The images in the first chamber are mostly monochrome or represent ornaments. Above the entrance to the central chamber there is an image of a horseman and a foot soldier painted opposite him, in a moment of duel.
Various and rich are the frescoes in the round funeral chamber. It is decorated with six horizontal tiers, situated one above the other. Two of them have decorations depicting figures. Best-preserved is the tier with images of hunting scenes. Particularly important and scientifically valuable are the images of horsemen. They are depicted wearing tunics, some with trousers. They are armed with spears and swords. The shapes of the weapons shed further light on the knowledge of Thracian armaments.
Impressive are the figures of the horses and the detailed depiction of the accoutrements which, according to the colours, were made of gold, silver and bronze appliqués. Their positioning on the straps, saddles and chest is important for the interpretation of already known armament. On the heads of the horses there are images of decorations in the shape of a labrys (a double-headed ax).

May 2009 saw the official launch of a museum centre called “Thracian Art in the Eastern Rhodopes” where visitors can see a precise replica of the Alexandrovo tomb located in close proximity.