1347
Scan with our application for additional information. Church of Archangels Michael and Gabriel, murals and woodcarving, Haskovo 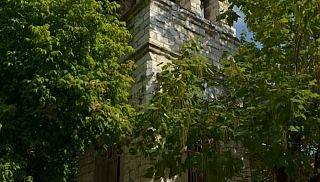 The church of the Archangels Michael and Gabriel was built in 1861 by Bulgarians who used to follow the Greek way of life. It was the second church built in the town and was known as the Greek church or the church of the rich. It is a three-nave basilica with a large, relatively low semi-circular apse and a wide U-shaped narthex. Many of the icons in the church have inscriptions in Greek with the name of the ktitor (church donor) and the year of creation is also mentioned. The most impressive among them are: the icon depicting the scene Synaxis of the Holy Angels - the church patron icon made in 1866, the icon of Saint John the Baptist from 1872, the icon of the Presentation of the Holy Virgin into the Temple, and the icon of the Nativity of Christ. The rich woodcarving of the iconostasis, the bishop's throne and the small iconostasis (proskynetarion) were made by the famous master Yane Spirov. The Holy Archangels Michael and Gabriel Church has fascinating murals, especially at the church vault. They were undoubtedly the work of a highly experienced artist. The compositional distribution of the figures in the scenes depicting in the domes and the icons depicting the patron saints is very carefully planned.

INTERESTING FACTS:
Few people know that in 1877-1878, during the Russo-Turkish War of Liberation, the largest of the seven gallows in Haskovo was erected in front of this church. In 1972, the church was designated a monument of culture. The dome of the church bell tower was plated in gold in 2003.
Rate: