1512
Scan with our application for additional information. Church of the Assumption of the Theotokos and woodcarvings, Haskovo 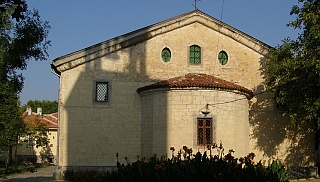 The Assumption of the Theotokos Church is the oldest and most revered church in the town. The residents of Haskovo invested a lot of faith, effort and courage, united and determined to obtain permission to build a church of their own in the years of the Ottoman domination. The consecration ceremony took place in an extremely solemn setting on August 15, 1837 - the day of the Assumption of the Most Holy Mother of God, one of the greatest Christian feasts.
In terms of architectural design, it is a nave basilica with a gable roof, without a dome. Internally, it has three altar apses. The iconostasis was made by a master from the Debar Artistic School and is notable for its elaborate woodcarving. Most remarkable among the frescoes is the image of the ""blessing God"". It is painted in the middle of the vault in a huge size and gives the impression of a depiction of God Almighty (Pantocrator), which was probably the main idea of the icon-painter conveyed in this image as if placed in the heavens.

INTERESTING FACTS:
The church was built on the site of an ancient chapel, in a vast courtyard with a stone wall more than 4 metres high, erected to protect God's house from abomination. For unknown reasons, the church is almost fully oriented to the southeast-northwest.
Rate: