1591
Scan with our application for additional information. Church of the Life-Receiving Source, town of Svilengrad 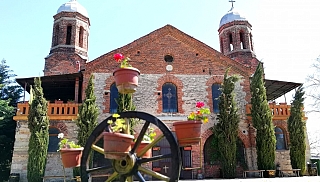 The church was built around 1860, mainly with donations from the residents of Gebran neighbourhood. The church now lies amidst a richly landscaped, beautiful park spreading over an area of nearly 4,000 square metres. Fully reconstructed is the network of park lanes where the main places for recreation of the residents in the neighborhood are located. The lanes are covered with coloured concrete slabs. The vegetation consists of deciduous and coniferous trees, large groups of flowering and evergreen shrubs and also climbing plants and shrubs. There are also several low deciduous exotic species. The luscious wood and shrub vegetation is maintained via an automated irrigation system. In place of the previously existing playground, a new one was designed and built, featuring modern children's playground equipment and benches. It is enclosed by an open-work fence with three entrances, which are connected with the main approaches to the church. New lamps have been installed along the alleys. The impressive building of the church is highlighted with night lighting.

INTERESTING FACTS:
During the Second Balkan War (1913), the church was razed to the ground, and after the end of the wars, its restoration began, which continued until 1924.