83
Scan with our application for additional information. Monastery of the Holy Trinity, Topolovgrad 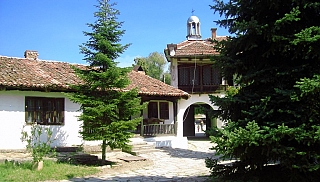 It is believed that a monastery emerged here as early as the 14th century at the time of Tsar Ivan Alexander under the name of the Holy Apostles Peter and Paul. It was probably devastated in 1373 by the Turkish hordes invading from the north led by Timurtash Bey. It was restored again in the 17th century. The monastery's history is closely related to the hajduk movement (rebel movement for freedom), for this reason it is still known as the "Haidushki Monastery". Legendary rebel leaders took refuge behind the monastery doors such as Valchan Voivoda, Indzhe Voivoda, Kara Kolju, Hristo Voivoda, Dagli Stoyan, Kara Dobri, Garabchi Georgi and others. After he withdrew from the life of a hajduk in 1812, Hristo Voivoda took the holy orders and was appointed abbot of the monastery with the monastic name Hrisant. He carried out a large-scale construction work for the renovation of the holy cloister. In 1818, due to the widespread plague epidemic, many people from the area found shelter and salvation in the monastery quarters. As a token of gratitude, they donated a lot of funds which were used to make new buildings (the barn, the refectory and the lower rooms of the monastery). In 1870, in connection with religious struggles, the monastery began to be governed by Greek clerics and by the Greek bishop from Edirne. This led to a strong reaction of the Bulgarian population from the Sakar Mountain, which resulted in a struggle for reclaiming the monastery as a Bulgarian spiritual centre. This struggle reached a successful result in 1898 when the monastery was transferred to the authority of the Sliven Diocese. In 1909, the monastery was transformed into a female convent and about 50 nuns from Saint Theodore the Studite Monastery (close to present-day village of Studena) settled there. Today it is inhabited by only two nuns and several workers. A central place in today's monastery complex is occupied by the Holy Trinity Church built in 1836. It rises on the place of the old monastery church of the Holy Apostles Peter and Paul which was embedded in the new construction. The new iconostasis was also made using the earlier one as a basis. The church of the Holy Trinity is a three-nave, one-apse stone basilica without a dome. Its size (12m X 18m) makes it one of the most spacious monastery churches in Bulgaria. Its architectural design and construction are characterized by simple and pure forms. Eight cylindrical columns via arches support the wooden vault, the walls are smoothly plastered, without frescoes. The icons in the church date back to the 18th, 19th and 20th century.

INTERESTING FACTS:
This is one of the biggest spiritual centres in this part of the country, which is still active.
Rate: