736
Scan with our application for additional information. 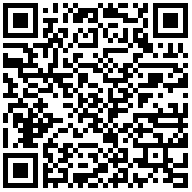 Haskovo in Haskovo, Bulgaria
The 1000 Years of Haskovo Monument was built in 1985 on the occasion of the 1000th anniversary of the town's foundation. The project was made by sculptor Krum Damyanov and architect Simeon Borissov. The monument rises on top of the foundations of Haskovo's Old Clock Tower, first discovered during the construction of Aida Hotel in the 1960s.
The monument ""1000 Years of Haskovo"" is a modern clock tower with a height of 26.5 m. It consists of three equal parts, connected in one composition. The first part is made of granite tiles with ornaments, with a ritual stone marking the event in the middle. The second part is a complex of four sculptures of gray granite figures with a height of 6 m, placed on round steel columns. The third part is a clock with four dials with a diameter of 1.6 m and two bells driven by weights based on the principle of old clockwork mechanisms. The clockwork mechanism was produced in Leipzig, Germany.

The monument symbolizes the four directions on the globe, the transition to the new millennium and Haskovo as a place at the crossroads between the East and the West.