5860
Scan with our application for additional information. Thracian complex at Chala Ridge in the Eastern Rhodopes

village of Kralevo in Haskovo, Bulgaria 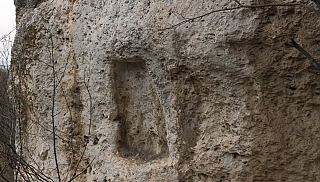 The religious cult complex of Thracian monuments (a fortress, a sanctuary, a necropolis) at the great Eastern Rhodopean Ridge called Chala draws strong interest. Explorations have found that at the highest part of the Chala ridge, at about 2 km east of Kraljevo, there are remains of three rows of walls of a Thracian fortress, which represent stone belts (fences) of dry masonry (construction without soldering). Iron heads of ancient and medieval arrows were found near the fortress. A Thracian sanctuary dating to the Roman and pre-Roman times existed here. Remnants of the Roman era date back to the 3rd century - several lead mirrors were found, some of them with inscriptions glorifying beauty.

About 1 km southeast of Kralevo, at Ai Bunar, on the western slopes of the Chala Ridge, there are several groups of picturesque rocks buried in lush greenery and very difficult to access. In the area of Ai Bunar one can see fragments of early-Thracian (late 2nd - early 1st millennium BC) and medieval clay vessels.